Minecraft Exit Code 0 And Keep Crashing: How To Fix This Issue? 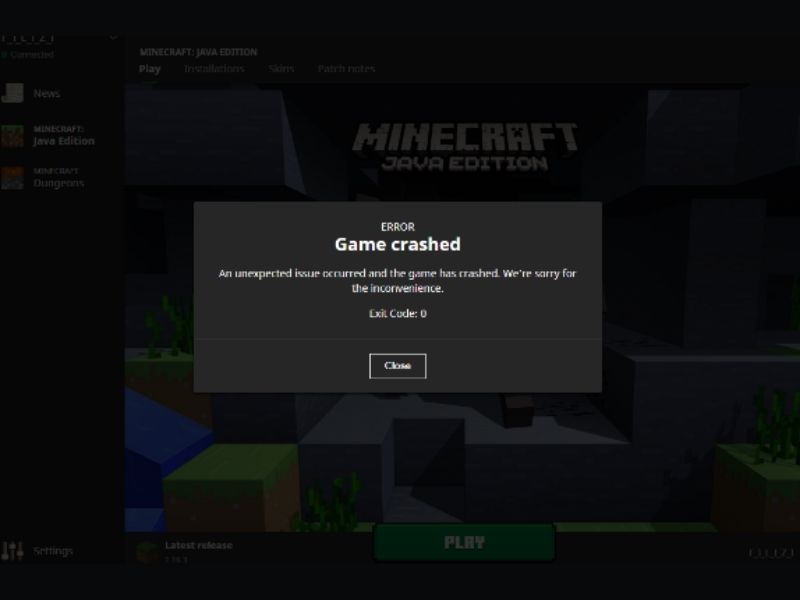 Are you trying to play Minecraft on your PC but it keeps crashing with an exit code 0 error? Have you tried restarting your computer, but you are still getting the same error? This tutorial will assist you in determining why the code 0 problem appears on your PC screen and what you can do to resolve it.

You are not the only one who has encountered a gaming error code. Without a question, Minecraft is a fantastic game for people of all ages. However, like with many other games, a few glitches are unavoidable when surviving the worlds in a single and multiplayer Minecraft gaming environment.

There have been multiple instances of players playing Minecraft when the game suddenly crashes and compels them to depart. The good news is that the internet’s knowledge can supply you with a number of viable remedies to get the game back up and running.

What is Minecraft exit code 0?

Many Minecraft players are claiming that the game crashes while they are playing in various gaming communities. Users may potentially see an exit code 0 error, as well as the error message “An unexpected issue happened, and the game has crashed.” We apologize for the inconvenience.”

Why do I keep getting exit code 0 on Minecraft?

There might be various causes for the exit code 0 problem. That is why it is difficult to determine exactly why it occurs. First, we’ll investigate the potential reasons and then find out how to deal with each one.

How do you fix exit code 0 in Minecraft?

If your Minecraft game continues crashing and shows an exit code 0, try the troubleshooting procedures below.

As a result, before starting the game, disable any incompatible software and see whether it resolves the issue. If the issue continues, go to the next steps.

The game will continue to crash if you use an outdated graphics driver. New drivers resolve compatibility issues and improve game performance at no additional cost.
Check to see if your graphics driver is up to date before attempting any additional difficult remedies. To do so manually, go to the Nvidia or AMD websites. Next, locate the most recent driver for your graphics card. Finally, get the latest driver and install it.

Some Minecraft Java version users were able to resolve the exit code 0 problem by upgrading the Java platform on their computers. As a result, ensure that you have the most recent Java version installed on your Windows 10 PC.

Furthermore, doing so might improve your gaming experience and assist you in avoiding the most bizarre problems that may appear while playing the game.

Minecraft is well-known for its modifications’ flexibility, which provides game players with limitless options. While playing with modifications is interesting, it is possible that they will trigger the exit code 0 issue.

As a result, if you’re using any modifications in the game, delete or disable them and wait a few days. If the game does not crash, you are running an incompatible gameplay mod.

Do a clean PC reboot

You may have previously attempted to restart your computer to resolve the problem code. A simple restart, on the other hand, is unlikely to resolve the complex problem. You may need to do a clean PC reboot so that your system can begin with the necessary services and applications to identify the offender.

How do I uninstall and reinstall Minecraft without losing worlds?

So, here’s the final solution that will most likely put an end to your misery: uninstall and reinstall Minecraft. However, if you want to save your worlds, be sure to relocate the Saves folder in the.minecraft folder before uninstalling the game.

To remove the Minecraft Java version, hit the Windows and R keys on the keyboard at the same time, and then type percent appdata percent.minecraft in the Run box. The game folder will then be opened. Drag the contents of the folder into the Recycle bin, or right-click the folder to remove it.

There is another way to remove all Minecraft editions. To do so, utilize the Windows search function to look for Minecraft. Following that, right-click on the Minecraft option and select Uninstall.

Finally, download and install Minecraft from the Windows Store, then replace the Saves folder in the.minecraft folder in the appdata% folder.

Many gamers get irritated when Minecraft crashes and displays an exit code 0 error. Troubleshooting, on the other hand, is rather simple and quick if you know the reasons of the mistake.

Hopefully, this tutorial helps you narrow down the problem and get your game back up and running. We recommend that you scan your computer for malware, since they might cause gaming difficulties.